Well the party is over…but what a party! That was our first HNBC boat gathering but it certainly won’t be the last, especially as there are rumblings afoot that next year we might make an assault on the mighty Rochdale and muster at Hebden Bridge (being short, I may just sneak round the back the long way round, as our up and over Pennine trip on Henry is still a way too lurid memory).

Now I’m not a particularly ‘clubby’ person but I didn’t hesitate to join the Historic Narrow Boat Club because what’s the point of having a historic boat if you’re not going to throw yourself into it with a passion, supporting and participating, chatting with fellow boaters, learning about their boats and their stories, or just general bantering with nice people who have a common interest. And what the HNBC does really, really well – apart from phenomenal organising of events – is make you feel welcome, really genuinely a part of things, however much of a historic neophyte you are. Although I’ve been boating for a long time, Andy and I have owned Enceladus for less than two years; some people have owned their piece of history for longer than I’ve been alive but it doesn’t matter, once you’re in, you’re in and made to feel very much at home.

And the Brownhills weekend has afforded the perfect relaxed occasion to put names to faces, faces to boats, boats to names, and to strike up new friendships and empty my wallet at Sunday’s tat auction. No-one warned me I’d succumb to auction fever! I struggled back to the boat with my eclectic haul, including a Norman Mitchell-donated horn with working ‘parp’ bulb (I gave Norman a personal rendition as I left this morning). Tat, eclectic or otherwise, wasn’t the word that Andy used when he saw it…although, in his defence, he did think the horn a very fine thing and parped it a few times for good measure. I just had time for some polishing of my (now rebranded) curated treasures before joining Chertsey Sarah and her fellow team mates for the big quiz, the fiendish finale to our time at Brownhills. This involved dropping Andy and Rosie and Buzz off with Jim and Ricky dog on Chertsey, where the blokes could indulge their hermitic tendencies – and their dipsomaniac ones too, judging by the state of Andy when we returned several hours later. I should have left a note round his neck – “Please send me to bed after three pints”. I managed to roll him home and into the back cabin, delighted that he’d had such a lovely evening and had found a new chum to hang out with, rocking (as in forwards and backwards geriatrically not headbanging youthfully) to 78s and getting all excited at changing gramophone needles. There may be a few trips together in the future given our bonding over Grand Unions, greyhounds, blogs and now seemingly shellac… 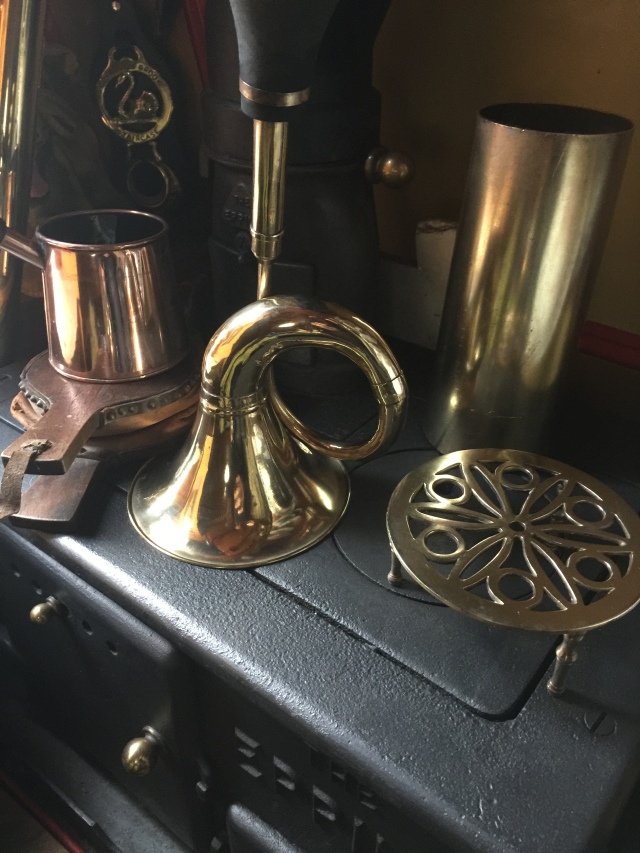 Well worth the money – cost me more in polish

Now about this quiz, set by the avuncular Peter Oates (owner of Stanton, who we have casually adopted as Enceladus’s big brother). Well, he may look avuncular but don’t be fooled, he is a demon in disguise – those questions were bloody hard! It was an absolutely brilliant production though, and typical of the sterling and selfless efforts members make for the enjoyment of others. I will have to do some serious swatting up and dust down my Ray Shill Through Time books if I’m to get a podium finish next time. My defence for falling woefully short of secret weapon status is that I am a Jill of all trades, mistress of none; I have a passing acquaintance with facts across a lot of areas (Ed. I think they call that bluffing) whereas Uncle Peter’s quiz called for a real depth of expert knowledge; it was beyond anorak standard, it was at the anorak-with-a-zip-on-hood-and-plastic-lunchbox-and-thermos-and spotter’s-notebook level. At least we didn’t come last and while I can applaud the perennial winners, Mike Harrison and co, I do think they’re a bit rubbish in getting a whole eight questions wrong. Must have had an off night.

One last thought. The proceeds from the tat auction will be donated to the Lichfield & Hatherton Canals Restoration Trust – an excellent use of my wallet’s contents! Many of us took the opportunity to head up to Anglesey Basin over the weekend, passing Ogley Junction and thinking that maybe one day we’ll have the chance to go straight on, destination Huddlesford. The restoration would be a triumph in itself but I also think it has huge strategic importance, and consequently it’s something that CRT should back with its full weight. To ultimately connect the northern BCN via the east from the Coventry and via the west from the Staffs and Worcs could, if not necessarily transform it, then certainly provide a stonking shot in the arm. A through route, taking in a fair bit of the Wyrley and hopefully encouraging people down either the Walsall or the Rushall as well, surely there’s some major potential in that? More boats means…well, just more…more engagement, more facilities, more interest, more upkeep, more money, more good things spreading outward into communities that we’ve found over the years to be friendly and welcoming, if sometimes a little challenged in the Keep Britain Tidy department. This is the restoration I’d most like to see in my lifetime, no doubt about it. The Cotswold Canals will be remarkable, I’m sure, but the Lichfield and Hatherton Canals could be real game-changers. If I ever get to go over the M6 Toll aqueduct in Enceladus, I will parp my horn all the way and parp it loud!

Time to take our leave – thank you and goodbye